My first pro gear review. May 2017 – keep checking back for new ones, and follow my instagram for images and updates.

by Dennis Fano and Eastwood Guitars 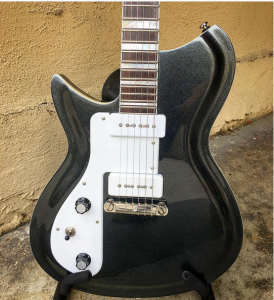 Hey! I played a left handed guitar I really liked!
I love gear. As you can tell from my Instagram account, I have a near-fetish for the classics: electric guitars built between 1949 and 1974. Because of this, and because I am not a tech, but a working player, I don’t tend to concern myself with various new guitars that don’t match the kinds of materials as my vintage favorites. For instance, I hear there is a “debate” about poly paint vs. nitrocellulose.  No debate with me.  I feel the difference and I don’t have any interest in poly on any 6-string in my life (basses are permissible). I like the pots and wiring that won WWII.  I like the body and necks to be made out of the best quality and best chosen wood. I like the older versions usually, as the newer versions of a design are often filled with cost saving changes as they approached the 70s where the quality went Ford Pinto for so many guitars, and gear in general.

So is there anything today that I play? Sure! Is there anything today that I can recommend for real players out in the world? Absolutely.  The big names still make the good stuff if you can pay extra for “Custom Shop” construction. But what of smaller companies and importantly for this blurb, what is out there for lefty players like myself?  The answer to this should interest right and left handed players because this means that I recommend a company good enough to get me away from making instruments my self.  Righties don’t know this about us, but we south paws have learned to make what we want and need from the fauna and flora around us… we never assume we are keeping a new instrument stock.

Last week I played a stock instrument that I actually deeply enjoyed. It was on loan, so I couldn’t modify it… I had to live and gig with it stock, and it made me look and sound great.

The guitar in question was a 2017 Rivolta Combinata hard tail in Toro Black metallic (Sparkly almost-black). A friend of mine on Instagram revealed to me that he was not only a brother lefty but worked (in some capacity) for the nice Canadians up at Eastwood Guitars.  He wanted me to try their new Dennis Fano designed guitar to see what i would say here.  He was confident, more confident than I was, that I would be pleased. He was right.

Likes:
First of all, like a lot of Fano designs, it looks like a combination of two distinct classics, in this case a Rickenbacker and a Supro.  Both are instruments I adore.  Who doesn’t love the occasional German Carve? I do.

I have purchased lefty designs from the USA and rendered in Korea before… my Fakenbacker (see my instagram) is light and resonant, but one of these days the pickups have to be replaced. I have already replaced all other electronics. I also bought a Mosrite knockoff with decent P90s, but the thing weighs about as much as a Vox Amp strapped to your chest. I don’t play it.  I’m waiting for the time and extra cash to weight relieve it and fill it will all new electronics.   Still waiting.

This is what I thought was going to happen with the Rivolta Combinata.  It though it was going to be heavy with pickups that needed to be chucked out.
Wrong.  Though this guitar is real mahogany, it is light and chambered with a delightful resonance that surprised me and made me sustain my notes longer just to feel the vibrations.  The scale is 25” which is better for me than a Gibson scale, and the fretboard was flat… 12” radius-flat… which was reminiscent of real Ricky’s I have played… but you could still bend, and the back of the neck was very, very comfortable.

The finish is poly, but the sparkles and gloss are really impressive, especially to the other players in the room, and the finish didn’t seem to adversely affect the resonating of the notes. The tuners felt great… they look like Klusons… light and familiar. That bridge was a surprise. Normally a 1 piece wrap around Gibson Style bridge isn’t compensated for intonation, when they are, they are only made right handed… so they make things worse for a lefty.  This one was COMPENSATED FOR LEFTY, very rare indeed.  Every lefty reading this knows how impressive this is.  I want them to sell me one for another guitar.

The thing looks great. The paint, the binding is superb, the inlay is so retro and cool, even the drummer commented on the inlay. The fingerboard wood doesn’t have that dried out beef jerky look of affordable guitars… it looks and plays like the top quality stuff that I am sure it is. The people working with me were IMMEDIATELY impressed. Also.. the CASE looks GREAT.  It reminds you of a real SILVER RIC case and it’s solid and actually beautiful. Bringing out the case already impresses.

The thing sounds great.  The P-90s are not Dumb Fisted like a lot of import soap bars.  They had a totally surprising shimmer on the top end and they were beautifully balanced.  I never needed to use a volume pedal to deal with pickup switching during a live recording gig. Rolling the volume back cleaned up nicely on both the cranked tube amps and, when needed, the overdrive pedal.  Sonically, I’d say this compared to a more chiming Les Paul Special but with a bit of 335 chambered feel. It might look like a Ric/Mosrite/Supro … but that’s not the sound… the sound is Gibson style.

• The frets were absurdly low. Bending was just too difficult. This guitar’s frets are perfect for songwriters who just strum chords and find for someone who plays more old style or Jazz style with shallow bends. Taller frets please.

• The pickups were noisy, as all p-90s are, with the center position being hum cancelling.  I had to be careful to stay in the middle position during recording until I knew the buzz would be covered by the other players.

• The switch felt terrible. I was worried it would break off in my hand… that said, it worked perfectly every time.

• The Tone pot was unusable.  It worked like an on-off switch. That might only be a problem for lefties as they wired it to turn backwards (counter clockwise) for more.  If I owned this guitar I would pull out all the electronics other than the pickups and rewire the pots to turn clockwise with the best American parts available (something like Emerson). I’m sure if Eastwood did that for us, it would raise the price of the guitar uncomfortably for the market.  I’m no expert, but there are probably “sweet spot” prices that have to be met, and so costs have to be cut somewhere. You righties don’t automatically think this way, but many of us lefties do: “What do I have to upgrade after I buy a guitar.”   Welcome to our world.  The Combinata needs upgrades to be pro, in my expert opinion.

• I got laughed at more than once on more than one job.  I took it to 3 lessons I taught and one live gig that was about recording… so a studio with a lot of people in it at one time.   They all pointed and laughed at me when I put on the guitar. Why? The same reason. The name. “Rivolta?!” “Revolting?”  “What a Rivolta Development!” …etc. Be ready to laugh with them and go along with it.  As soon as they heard it, they all forgot about the joke. It might have even made the name and the guitar cooler at that point.  Bad name, great sound.. .now the name is cooler.  If you are sensitive to that stuff, you should be ready for it.  If you don’t give AF.. then this is part of the FU factor.

This guitar would get an a A grade from me but for the price (and the tone control).  A great-playing, good wood, well made Korean product that needs rewiring is a great option for players, especially lefties. I often recommend it.   Fender and Squier give you these options between $6-900 Throw in a case for $100 and we are talking an average price of about $850 delivered. Eastwood wants 1,199 delivered (but the case is better than a stock case) and 1,350 with a Vibrato (which would come standard with a Fender/Squier).

Remember: A ‘B’ means that I really enjoyed playing this thing.
~ Jensen